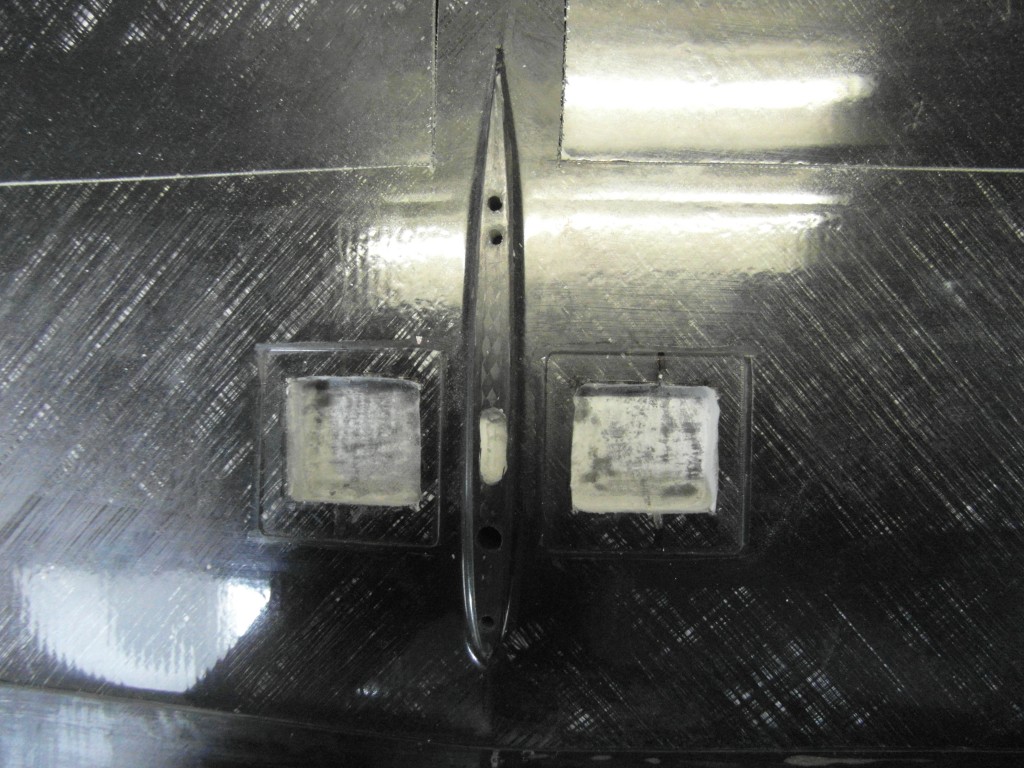 Lay the servo on the wing and draw lines around to make the servo hole. Then take a dremel and gently mill the skin and foam away al the way to the top skin until the servo fits in. 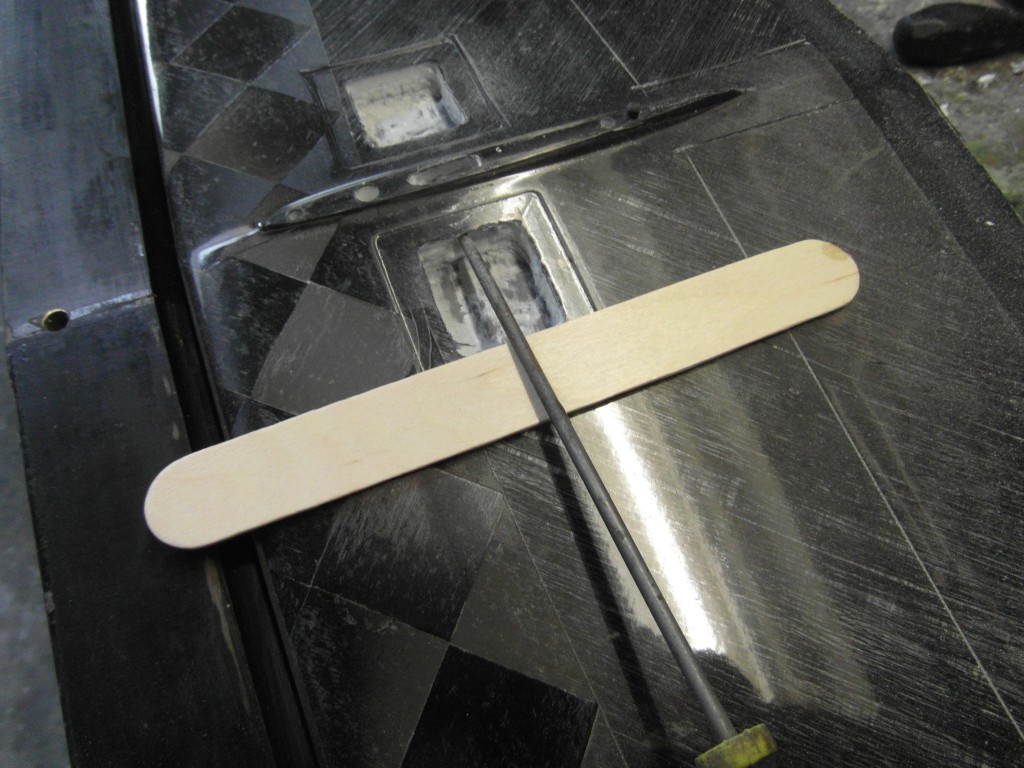 There are already channels for the servo wires in the foam but because of the pressure during fabrication they become a bit smaller. Use a file and some support to file the channels bigger so that the wire can pass through. 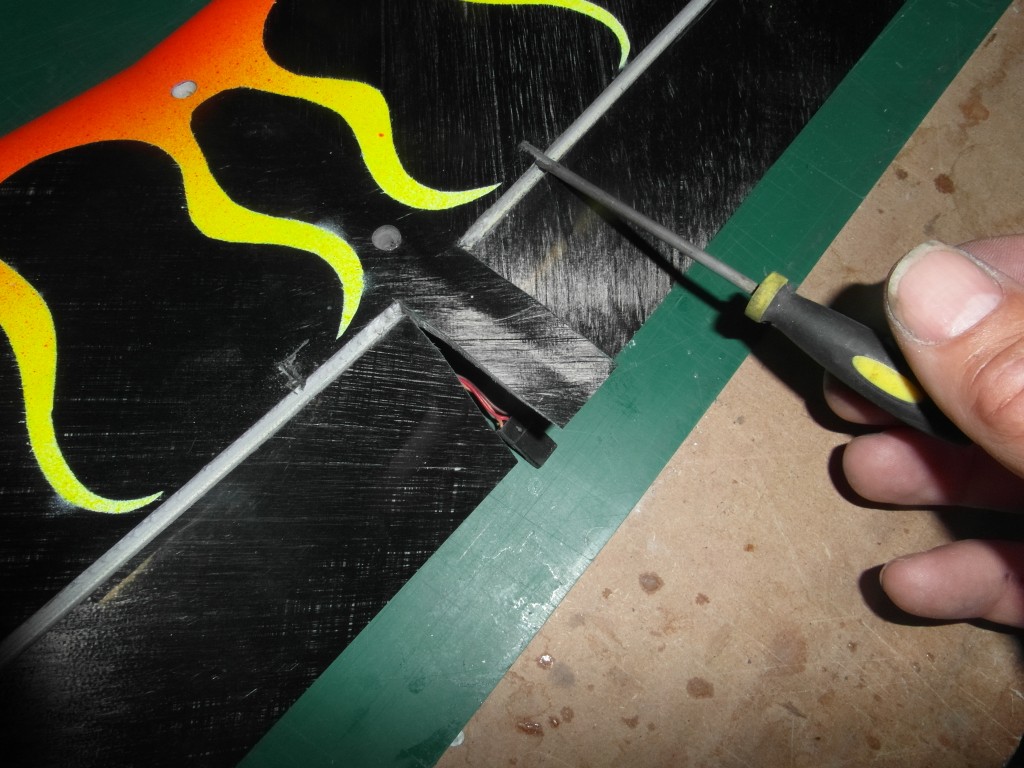 With a file you can make a channel for the pushrods through the wing towards the servo bay. Make sure you end up close to the skin (bottom side). 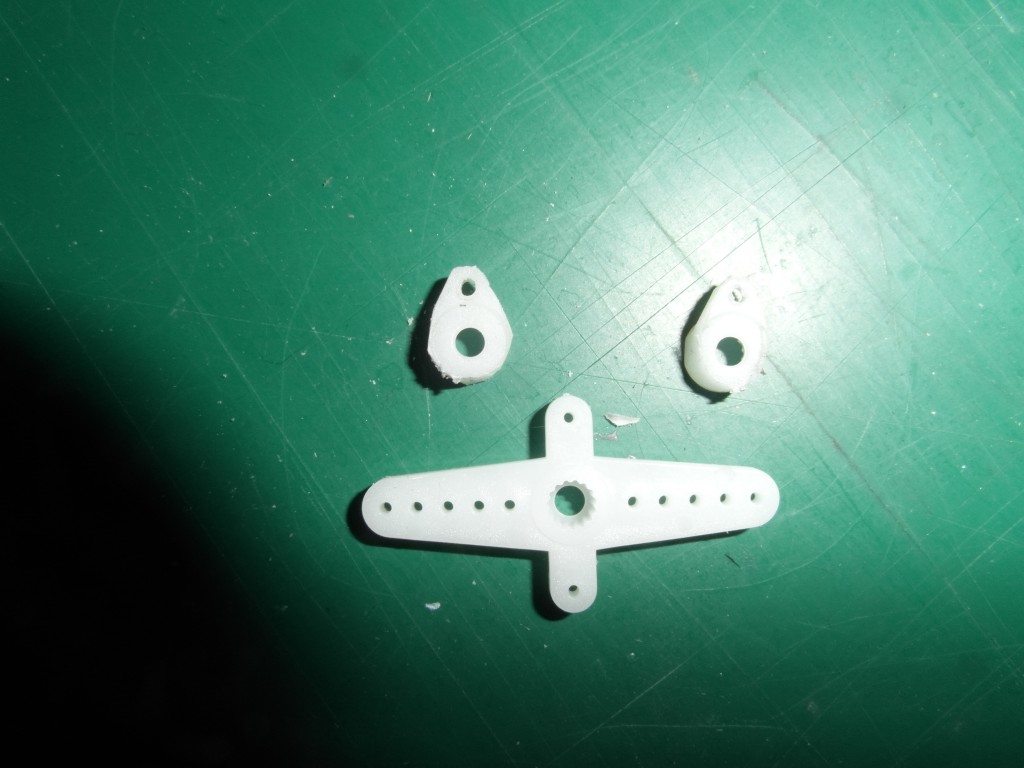 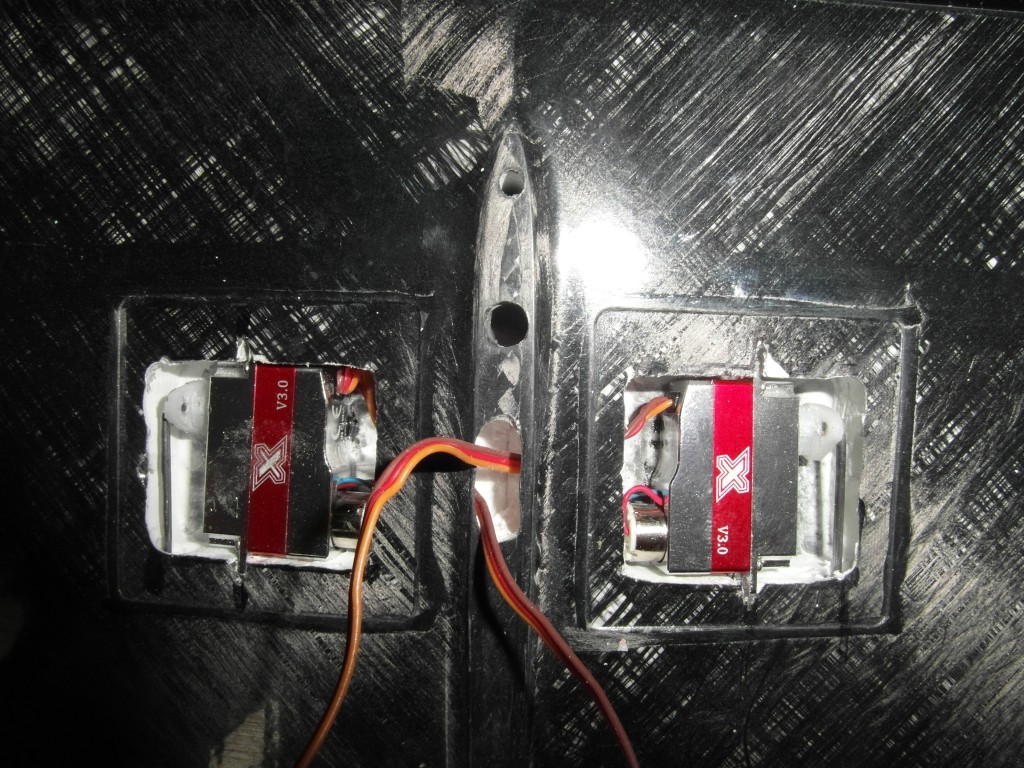 Connect the servo’s to the receiver and turn on your transmitter. Make sure the servo is set about 30 % offset to make the downward travel bigger then the upward travel. Take the two metal wires and bend a z bend in them and then hang them through the horn. With a drop of 5 minutes epoxy the servo can be glued in. With the leftovers from the epoxy the 5 mm root pin and the 3 mm back pin can be glued in. Let the epoxy dry before to go on. 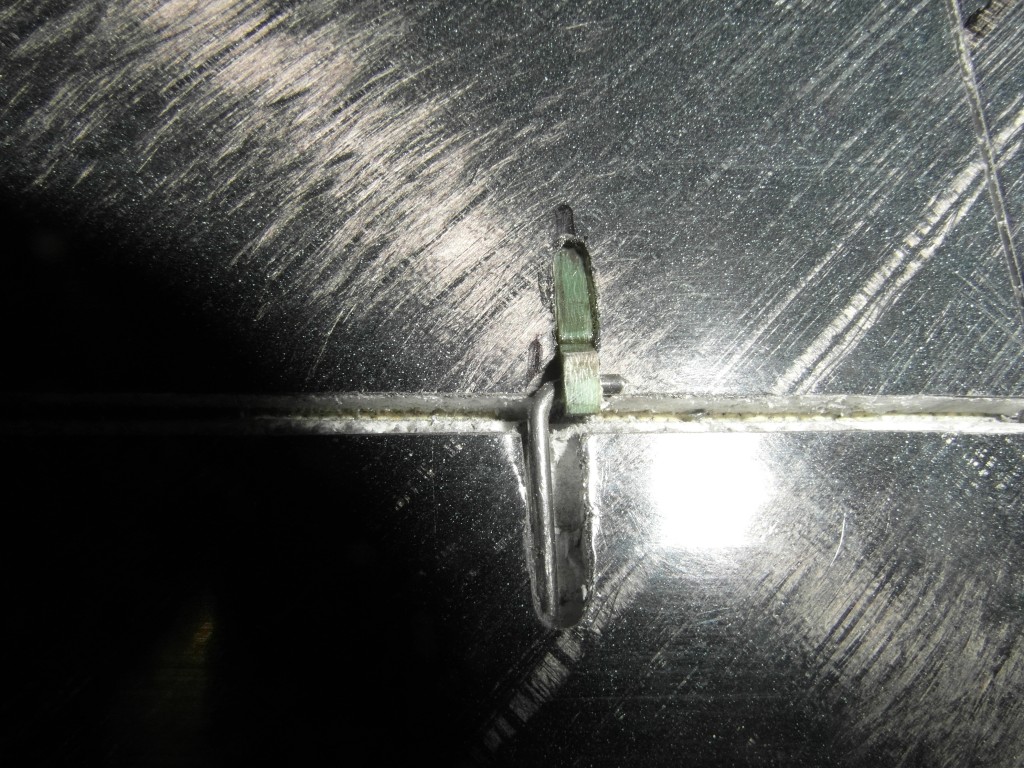 With a flat file you can make the slot for the aileron horn.The hole in the horn should be over the middle of the gap. With some pliers you can bend the pushrod 90°. Then push the horn around the pushrod and push it in the slot in the aileron.  Make sure the aileron is neutral. This can be done by taping it in the middle. The horn can be bond to the aileron with a couple of drips of thin CA. Epoxy will work also. Then cut away the protruding wire. Do the same thing on the other side. Then cover the servo with the supplied covers. They can be taped over. If the servo horns don’t run completely free you can make smal holes in the cover to give it some space. 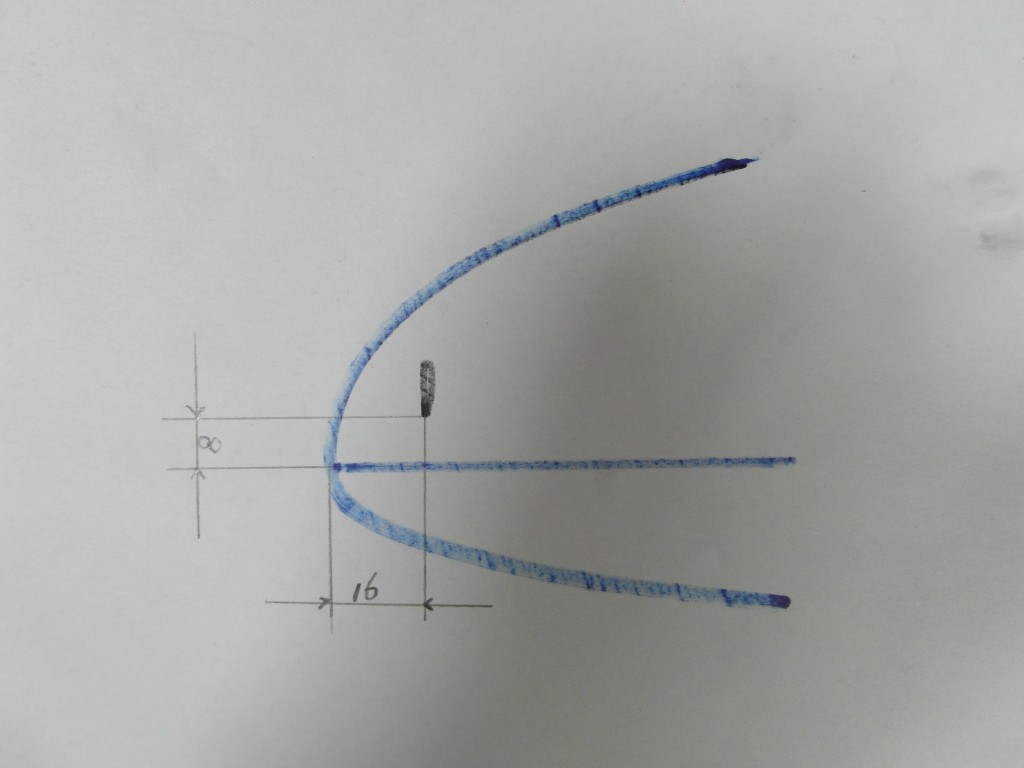 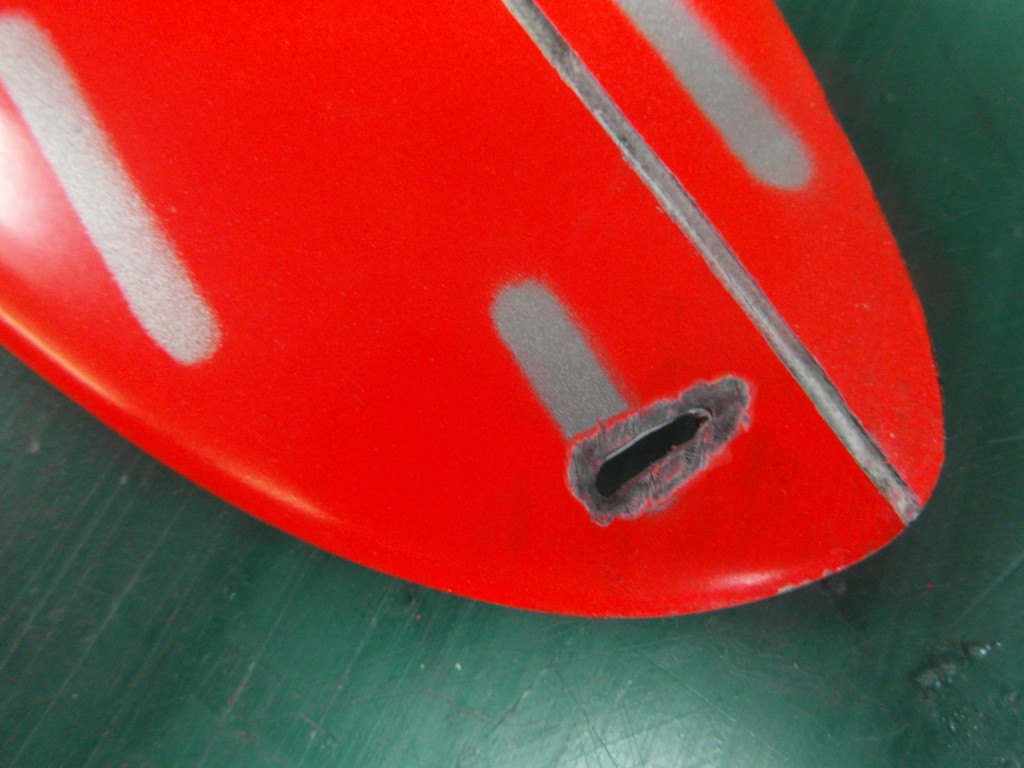 Cut a hole in the wingtip for the launch peg. The paint around should be sanded away for better bonding with the glue. Then glue in the launch peg. Round side to the front and thicker (airfoil) side towards the fuse. (pictures from original Tweagle) 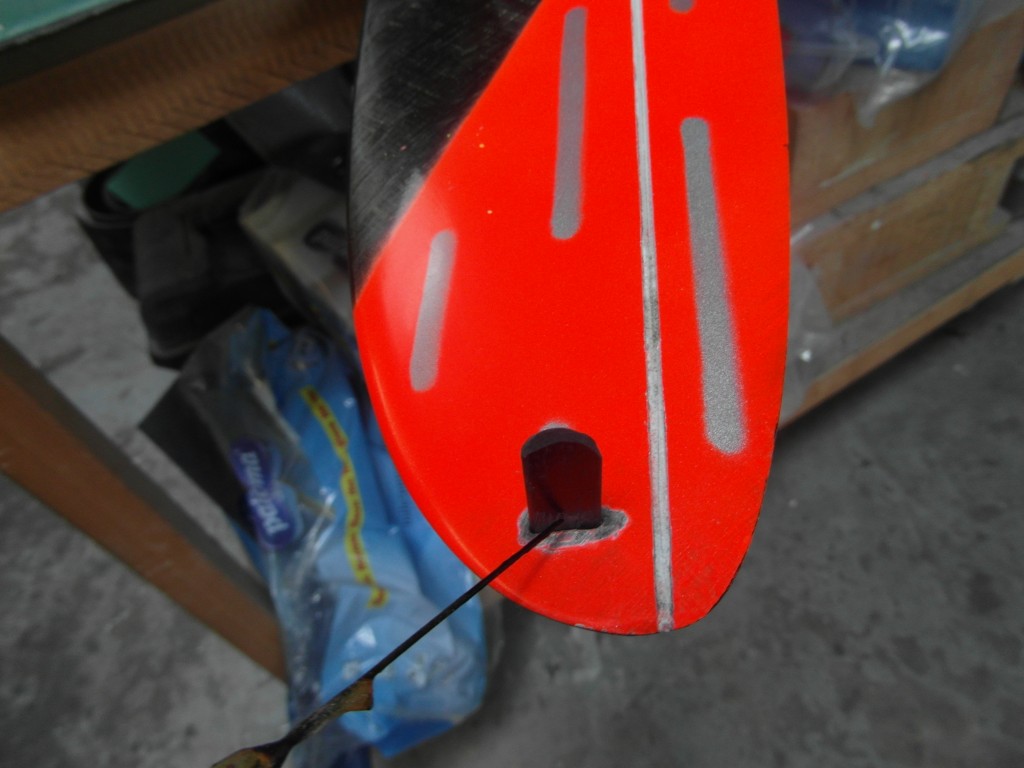 With some thin ca and some kicker you can make a small filé on both sides, top and bottom. Epoxy will work also (picture from original Tweagle).

The wing can be finished with taping the gap covers over the gap. The white paper need to be removed and the covers should be taped on the wing with about 2 mm overlap on the ailerons. 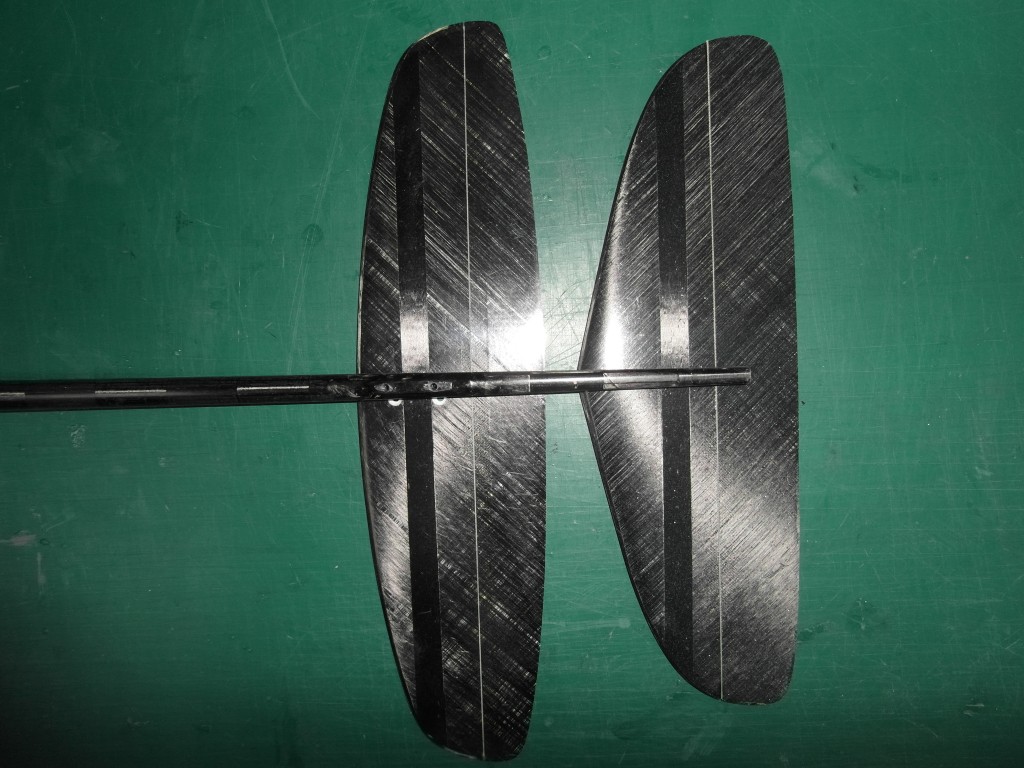 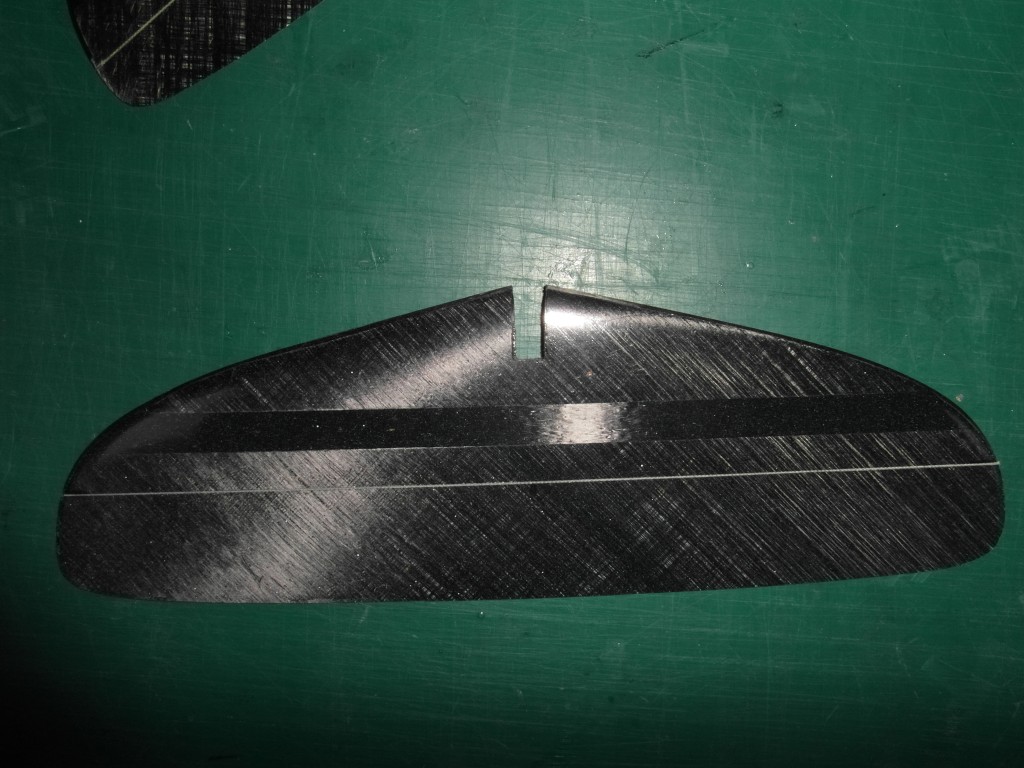 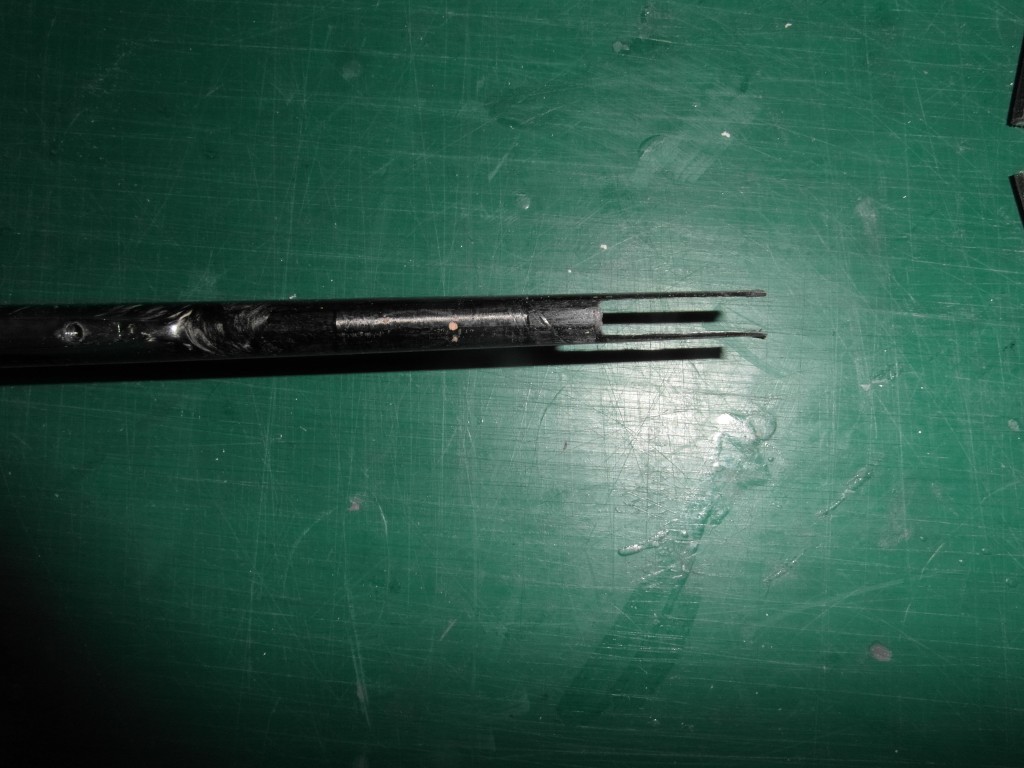 Then cut a slot in the fuse. This slot should be cut open all the way to both sides of the fuse and should be so deep that the spar of the vertical fits completely in it. 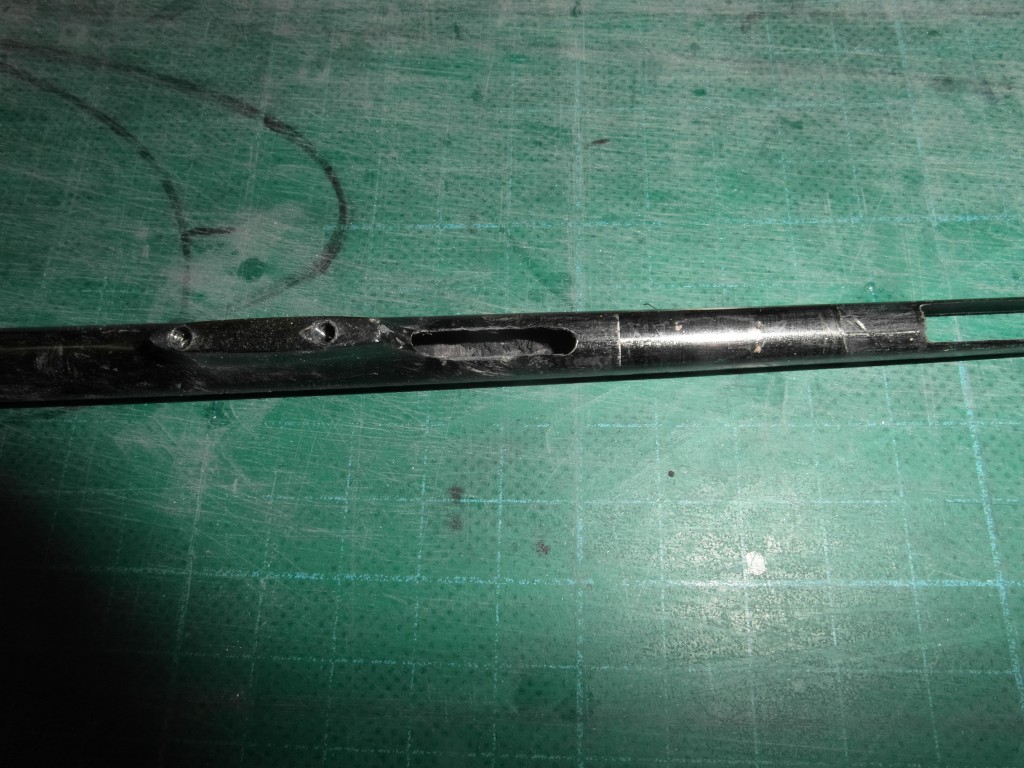 Then cut a slot at the back of the pylon for were the elevator horn will fit through. 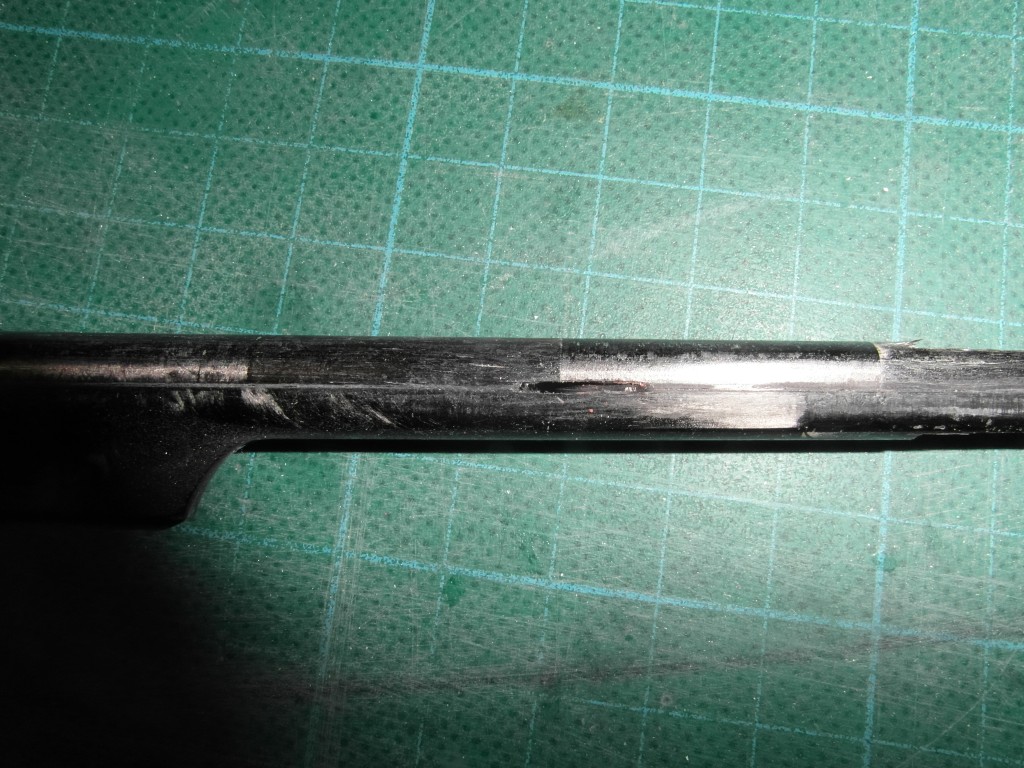 Then a very small slot for the exit of the rudder string. 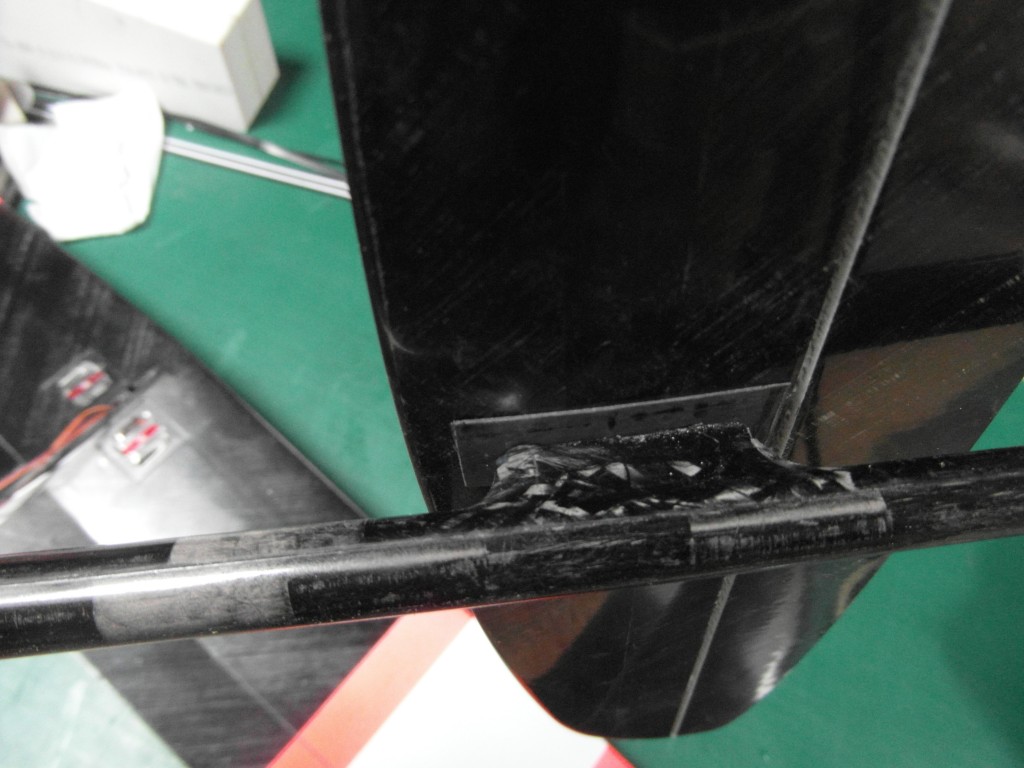 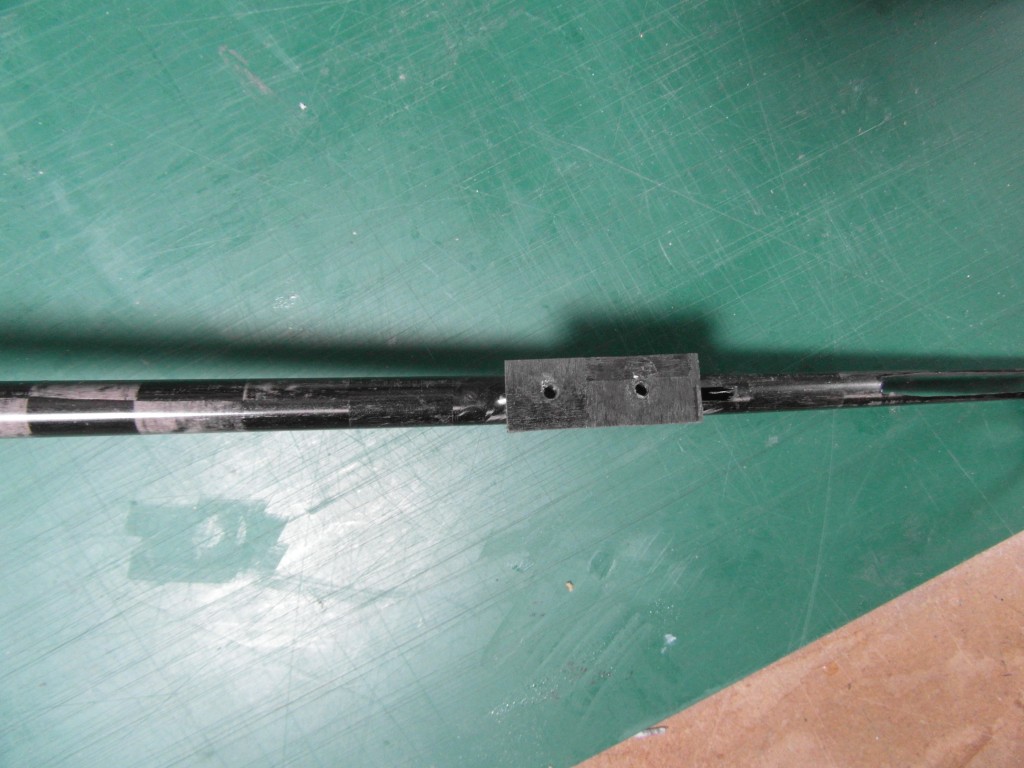 Once the stab is off you can ad a bit more ca around to make a good bond. 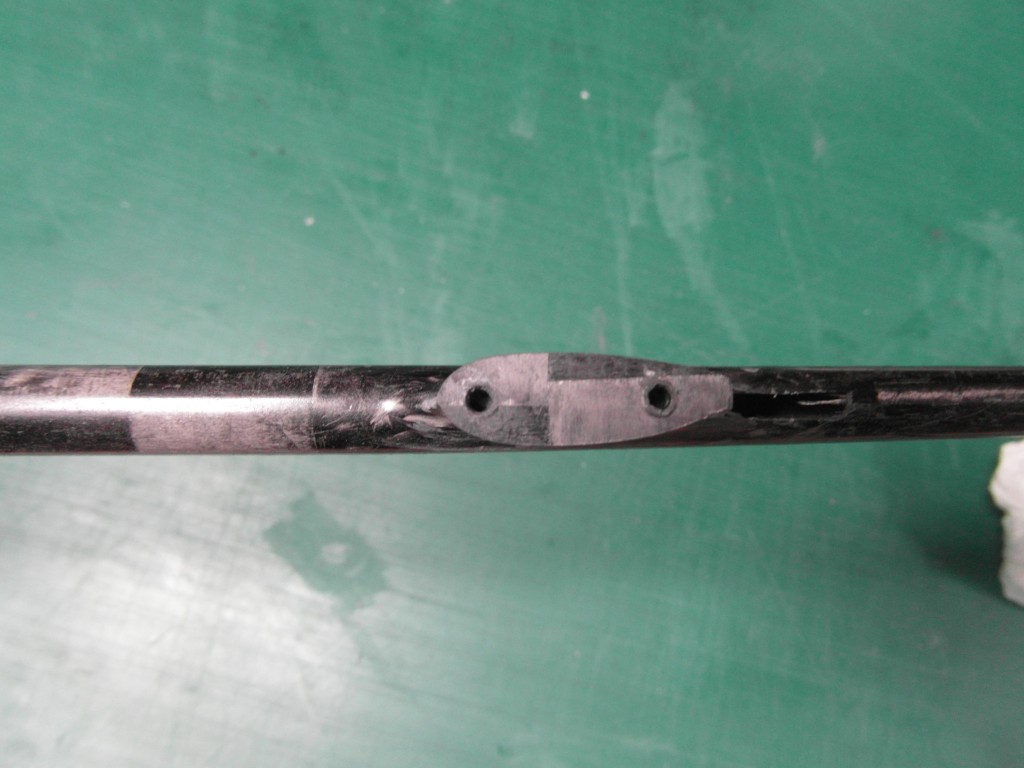 Then take a Dremel and sand the support to a nice droplet shape with the widest point at the point were the stab spar is sitting on it. 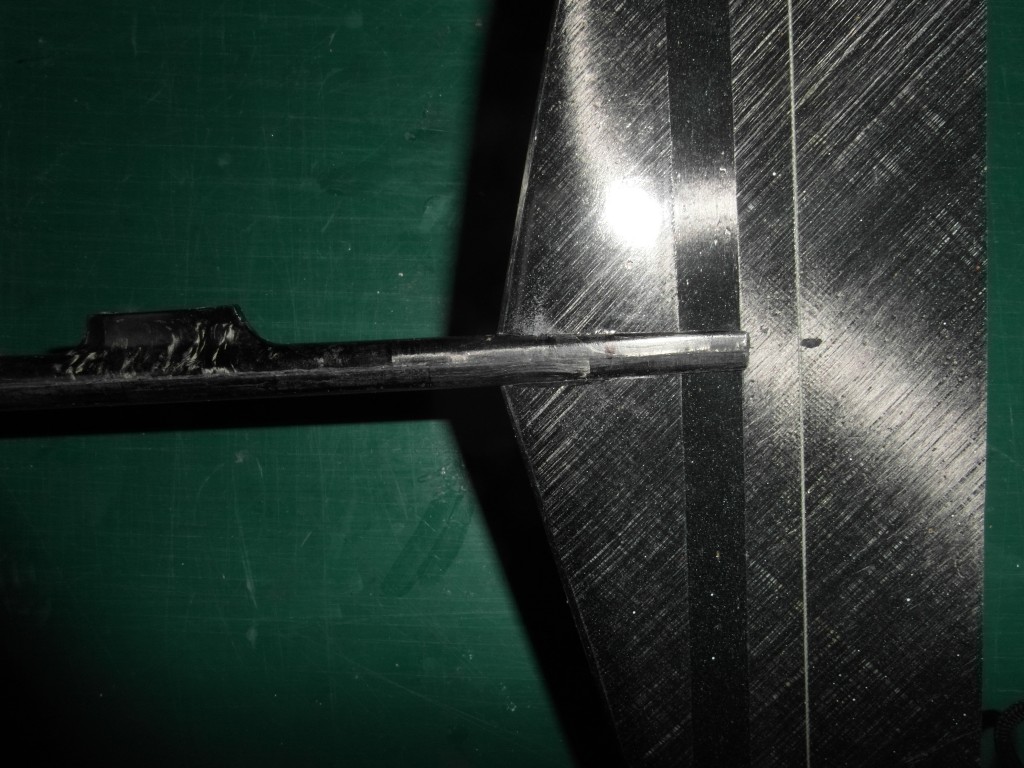 You can find in the (original) Tweagle manual how to mount the springs and stab horns. 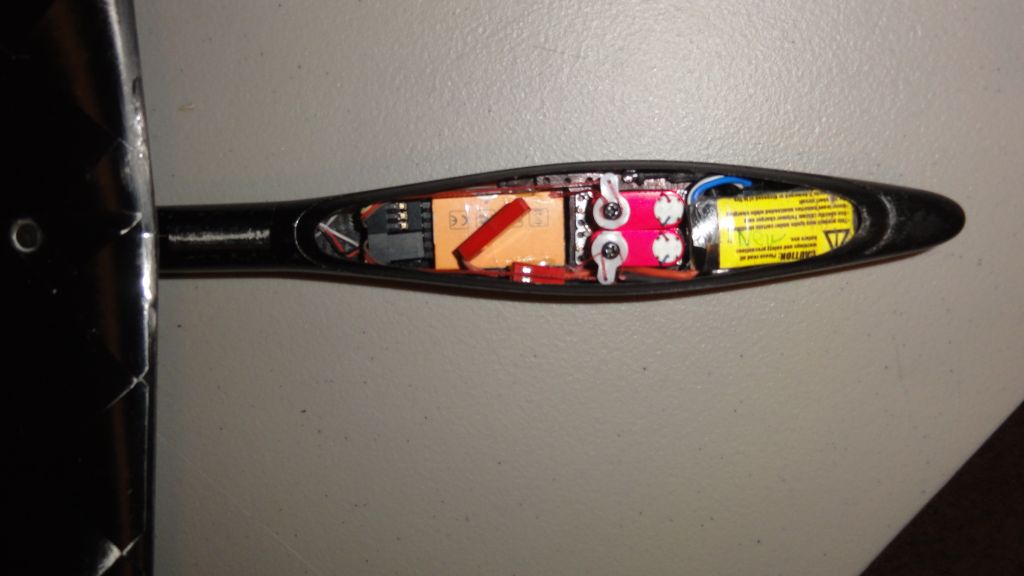 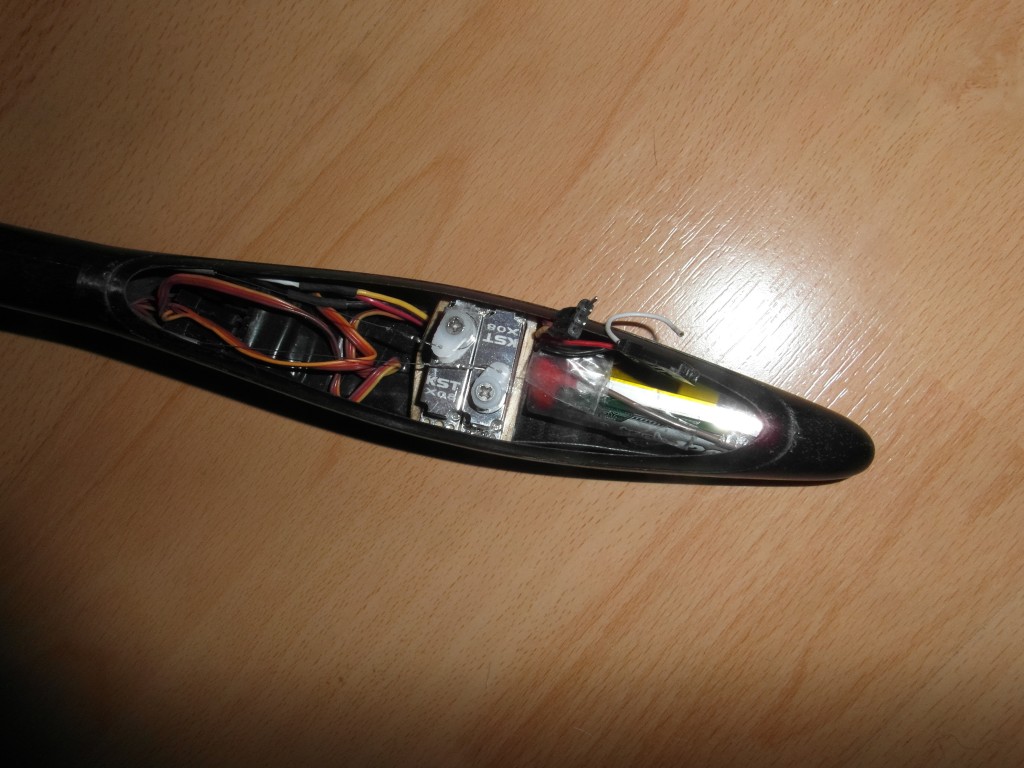 Make from a piece of 2 or 3 mm multiplex a servo tray. The tray should be mounted as forwards possible with still enough room for the battery. As a battery a 650 mAh round cell for the lighter planes and a 1200 mAh round cell for the stronger planes can fit. The receiver can be placed behind the servo’s under the elevator and rudder strings. At the back of the servo mount just behind the servo’s there is a hole to mount the ballast. For strings you can use dyneema or kevlar line but my personal preference are 0.010″ (0.25mm) guitar strings.

Make sure you check the CG and set the settings as on the bottom of the manual. Because of the small stab the Tweagle td can be flown with very little elevator deflection. The Tweagle td also needs very little flap due to the wing section that can deliver more lift than most others so start with low deflections and start adding to your needs. Always give the plane first a gentle hand toss to see if the plane flies straight and then start with gently discus launches. Only start giving full power when everything is set to your likings.

Good luck with your Tweagle td.

There are 2 different CG settings possible for the Tweagle td. One with the CG at 74 and one with the CG at 70. The CG at 74 gives a extremely good glide with very neutral flying characteristics. With the CG at 70 the planes is a bit more easy to fly and has better climbs. With the CG at 70/71 the stab pylon needs to be highered at the backside with about 10 to 12 layers of thin scotch tape (2 or 3 layers electric isolation tape) beginning just behind the first screw hole jumping a couple of mm everytime with every layer. This increases the incidence by a small margin. Most pilots will prefer the last option.

For launch you can use about 1 mm preset on a spring activated switch to let the model turn steep before to go over in launch setting.